Firstly, my apologies in the long delay – life became rather hectic, especially with the holidays.

I just wanted to let anyone who has been watching this space that future posts are coming, including Part 2 of “But it’s only a bolt…right?”

In the meantime, I hope that everyone is enjoying the last few months of 2012 and I will endeavor not to make a liar of myself.

The value of historic images in Archaeology

So, this post interrupts my story about “The Bolt”, but I was too excited to wait in putting it up.

My M.A. thesis is an analysis of life on board the steamboat Heroine, utilizing the personal possessions and other artifacts representative of life on board that were recovered during excavations from 2003-2008.  It has been quite a process of research and writing about what life was like on a 19th century Western river steamboat like Heroine.  Through my research, I have developed a deep appreciation for the value of historic documents, newspaper articles, drawings, and paintings in illuminating 19th century steamboat life, which is often elusive in the archaeological record.

This appreciation is why I nearly squealed when I came across a copy of “The Bard Brothers: Painting America Under Steam and Sail¹” at my local Half Price Books store for $1 on the clearance shelf. 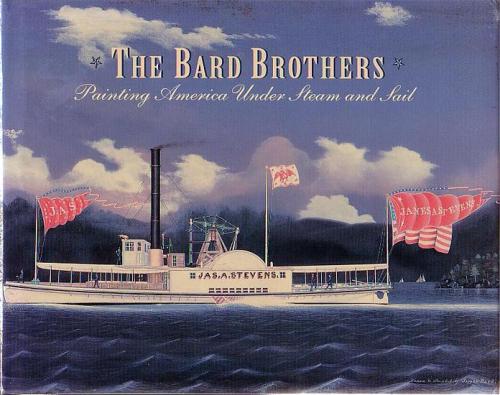 Cover of “The Bard Brothers: Painting America Under Steam and Sail”

While this book is technically listed as an Art/Architecture book and focuses on the lives of the Bard brothers as artists, it is a fabulous resource from an archaeological perspective.  There is debate about how significantly artistic conventions affect the accuracy in depictions of historic vessels, but this is a much larger argument than this post can hold.  In the case of steamboats from the earliest periods, there are no photographs and so drawings and paintings like those collected in this book serve to complement written descriptions in helping us visualize 19th century steamboats.  Proportions and some depictions might not be 100% accurate, but even a stylized image can highlight an amazing amount of detail.  For example, some of the paintings in the book show bright, multicolored curtains inside the cabin windows with different styles and colors apparent between different boats.  This might seem like a minute detail, but it helps to draw a picture about the experience of cabin passengers on board steamboats – even if the boats shown in this book are more representative of 19th century steamboats from the North-East than the West.

The other key benefit to these images in archaeological research is the visual value they have when discussing the past with a modern audience.  I could talk all day about life on board Heroine, but pictures are truly worth 1,000 words and help to bring the past to life.  Plus, who doesn’t like a lovely picture? 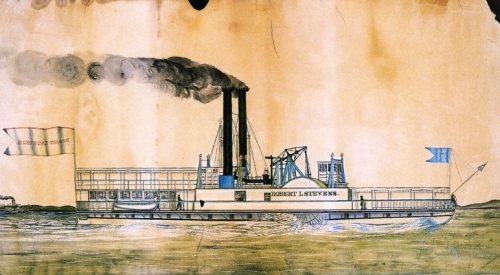 As an important note – many of the Bard Brother’s paintings (besides the above) are available online from The Atheanaum, an amazing online resource for art images.  They have an awesome mission statement, but that is a discussion for another post.

If anyone has any thoughts on the value of art and historic renderings when it comes to archaeological research, discussion is welcome!

In association with the Mariner’s Museum, Newport News, VA.

This is part one of a story about a simple, copper-alloy fastener that has implications much larger than its simple form might betray.

In 2010, I was working as a Graduate Research Assistant in the New World Lab as part of my studies in the Nautical Archaeology Program at Texas A&M University.  As often happened during the afternoon, I was approached by our director, Dr. Crisman, and given a book with several sticky notes marking specific pages.   He had been e-mailing with a gentleman [Mr. P.] who had contacted him for assistance in identifying an “object” (Fig 1.) and he wanted me to scan a reference and send it to Mr. P.

The “object” turned out to be a bent, copper alloy bolt with a washer.  I was unfamiliar with this style of fastener and found the description that Dr. Crisman sent to the gentleman too perfect to rework:

“A bolt like that would be used to fasten together ship’s timbers, something like a floor timber from a frame to the keel, or perhaps to secure a plank butt to a frame so it did not spring loose. Your bolt is likely from the 1800s or very early 1900s. The Royal Navy began using copper fasteners in the 1780s, and by the nineteenth century they were increasingly common in merchant ships, too, especially once inventors came up with alloys that cheapened their cost by mixing less expensive metals (zinc, for instance) with the expensive copper. The use of copper alloy bolts and spikes was made necessary by the use of copper sheathing to protect wooden ship timbers from being invaded by teredo worms. Iron fasteners dissolved due to electrolytic action with the copper in the surrounding seawater. Copper alloy bolts were more expensive and did not hold as well as iron, the bolts had to be headed (mushroomed) over washers to ensure a tight hold, like on your example. The copper bolts or spikes would only be used below the water line where the hull fasteners would be in contact with the sheathing.” – Dr. Crisman, Personal Correspondence  Feb 7, 2010.

In addition to this description, the reference Dr. Crisman had me send Mr. P.  was an image from “The American Built Clipper Ship 1850-1856” by William Crothers (Fig 2.).

Once the gentleman knew a bit more about the bolt he mailed it to our lab as a donation, for use as a teaching aid in a regularly taught class on the outfitting and rigging of wooden ships.  When the bolt arrived at our lab, Dr. Crisman passed it into my hands for conservation.

Besides the what I had learned from Dr. Crisman and William Crother’s publication, the only other information I had about the bolt was that was recovered by the first husband of Mr.  P’s wife, while he was diving off the Florida keys from 1984-5.  Part of conservation is not only stabilizing artifacts, but researching their history.  In this case, my goal was not only to conserve the bolt and prepare it for use in the rigging class, but use the conservation process to search for any further information about the bolt, such as a maker’s mark.

My name is Heather Jones and I am a M.A. Candidate in the Nautical Archaeology Program at Texas A&M University.  Besides attending the program at A&M to complete my degree, I also selected the program because it offered a training certificate in artifact conservation.  My true passion in archaeology lies in the conservation of the artifacts that field work and other projects uncover, as well as then getting to share those artifacts and their stories with others.

Unfortunately, most people do not get the experience I have in getting to interact with the artifacts as they undergo treatment.  In fact, many artifacts that are excavated undergo treatment and then find a life in a storage facility somewhere out of the public’s view.  The primary goal of this blog is to open up and share the projects I have had and will have interactions with on a larger scale in an attempt to widen their audience.  Besides the projects I have a hand in, I hope to also help spread the word about many of the other incredible projects taking place in the archaeological community.

It is also my hope that this blog will serve as a sounding board for practical and ethical issues related to the conservation and curation of our cultural heritage.  Why should we care about preserving the past?  How do we go about treating artifacts?  I might even dare to touch the ever controversial subject of treasure hunting, salvage, and the sale of artifacts.  Only time will tell – so welcome and I hope that you enjoy my humble offerings!

Artifact Conservation outside of the lab

Nautical Archaeology in the 21st Century